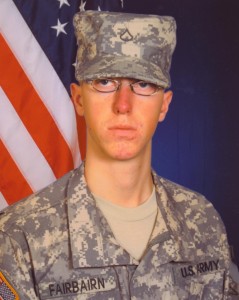 Pfc Aaron E. Fairbairn of Aberdeen, Washington attended Aberdeen High School, graduating in 2007. Growing up, he had a job as a paperboy at Daily World where he received the “Paper Carrier of the Year Award” at age 13. He worked at Papa Murphy’s Pizza where he proved to be honest and dependable. Aaron was also a lot attendant at Whitney’s Auto Group. Throughout his youth, he was a Boy Scout and developed a love for the outdoors. The off-road enthusiast loved riding dirt bikes and four-wheeling in his truck. Early in 2008, just six months out of high school, he joined the Army. By the summer of 2009, Aaron, was deployed to Afghanistan, spending most of his free time on base watching the DVDs his family sent to him. This gave his family some comfort, since they felt he was safest there. Aaron was scheduled to return home from his Afghanistan deployment in September 2009. He was killed at age 20 during a suicide bombing attack against a U.S. outpost near Zirok, in Paktika province, in south-east Afghanistan by the Taliban.