Independence Day; it’s not all about partying – although celebrating our liberties is certainly a major component – it is also a time to reflect gratitude for those who have paved the way for the freedoms that we enjoy in our great nation. 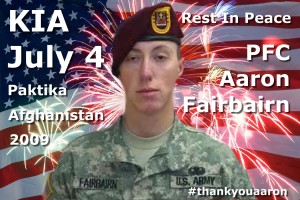 My wife and I had the privilege to raise a young man into the kind of man who would be honored as a hero laying down his life on our behalf in honor of those very freedoms. PFC Aaron Fairbairn was an inspiration and a blessing to all who knew him and especially his brothers in arms who were there on that fateful day in Paktika, Afghanistan, to me, he was – and will always be – my son.

The fourth of July has always been a special time for Aaron and our family, as we would rendezvous every year at a seaside community to celebrate Independence Day and enjoy the fireworks. Aaron always enjoyed lighting his own fireworks on the beach prior to the official pyrotechnic performance. The only other holiday he loved more, was Christmas.

It was five years ago, today, that Aaron’s mother and I answered a knock at the door; a pair of unexpected Army men in full-dress uniform. It was impossible to believe the news, as it had only been hours since we’d talked to Aaron on the phone. 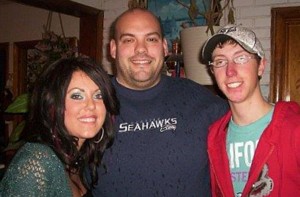 Within hours Aaron’s brother, Beau, sister Sascha and my wife, Shelley, were accompanied by a Casualty Assistance Officer flying from Seattle to Dover to meet Aaron when he touched down on American soil.

I had done such a good job of doing what I could to keep everyone as calm as possible, blanketed in love, ‘til their departure. I had called every friend and family member’s number in our address book. Since it was the 4th of July, I was forced to leave phone messages for everyone.

At the time, I had been working with a team of authors for a couple of months and we’d kept contact through Twitter. Though they were obviously not online at the time, I reached out to Twitter. My first compassionate words following the departure of my family were from a Twitter user I didn’t even know. 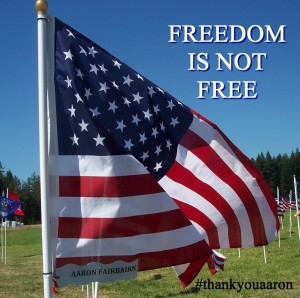 In that moment all my strength vanished as my heart broke. Within hours the Twitter community had chimed-in and the hashtag #thankyouaaron rocketed up to number one on the Twitter charts in honor of Aaron’s sacrifice.

I was blessed, encouraged as Aaron was honored in that moment, and it helped me knowing that Aaron’s loss of life was not inconsequential; even in his sacrifice, he had touched the lives of others who hadn’t (and never would have) had the chance to experience the joy of meeting him.

The last five years has been like a lifetime, only to have Aaron’s name in the media again, due to some connection that may exist between Bowe Bergdahl’s “capture” and the attack that resulted in Aaron’s making the ultimate sacrifice. 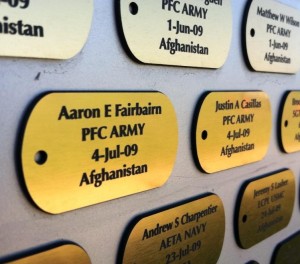 I hope that whatever drama surrounds Bergdahl doesn’t tarnish the image of any service man or woman who puts their life on the line every day, so that we can celebrate Independence Day; Aaron was such a man. And I have the deepest respect and gratitude for anyone who donned a uniform and stood shoulder to shoulder with Aaron.

America may have issues, but I love this country and every man and woman who is willing to step up for you and I, so that we can enjoy – and even argue or complain about – this great land of the free and home of the brave.

Thank you, all who have answered the call. We are all forever in your debt.

God bless you – and America,