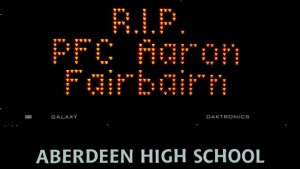 I really can’t speak for my son, PFC Aaron Fairbairn whose name is listed as one of those killed in connection with the controversial disappearance of Sgt. Bowe Bergdahl in 2009. Suffice it to say, Aaron was a kind and gentle soul, and also proud to be in service to his country. The now-growing scandal and ongoing investigation regarding Bergdahl’s release has no impact on the memory of the brave, dedicated, compassionate person and upstanding character of my son.

Knowing Bowe as he did, serving with him in the same unit in Afghanistan, I am sure Aaron’s first response regarding Bowe’s release from the enemy, the Taliban who held him for five years, would have been joy for his fellow soldier and family back home. Any further statement from me regarding Aaron’s reaction or opinion would be pure conjecture, just a guess on my part or anyone else who would speak for him. 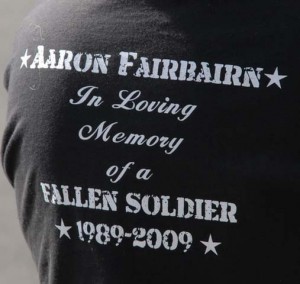 As for me, however, I have prayed that Bowe (who was one of Aaron’s brothers-in-arms and friend) would return home safely, every day since I learned of his capture. I was tearfully grateful when I first heard about Bergdahl’s release, which was abruptly interrupted by a storm of controversy surrounding his exchange for five top tier terrorists being held in Guantanamo. I admit that I am bewildered and greatly bothered by the statements and accusations made against Bowe Bergdahl, the army, the government and the Obama administration by fellow soldiers who knew and served with distinction with my son.

Whatever the outcome of the controversy and investigation, I am first and foremost saddened with this happening. Truth be told, if it is proven that the government did conspire to free five of the worst terrorists in exchange for a someone who may have conspired with the enemy, causing the death of fellow soldiers, including my son, then I can only hope and pray that justice is served, and swift.

I, for one, though would rather steer clear of the rumors and conjecture while vying for the truth to be revealed in a succinct and reverent manner. There is so much hatred and anger surrounding the matter and I have no desire to add fuel to the fire. 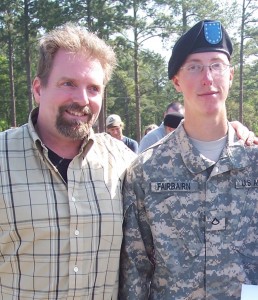 For now, let me say that at first we thought it was Aaron who had been abducted because we hadn’t heard from him since that event was reported in the news. We were never so happy to be able to speak with him on the 3rd of July, which turned out to be the day before he was killed in a Taliban attack.

I can only speak as a parent. As such, I am so happy for Bowe’s parents, that they can see their son come home, alive. Many have given far more than the average American could even fathom; but blessed are the loved ones of every single serviceperson who are able to greet him or her returning from harm’s way.

When Aaron called us on that July 3rd, it was after a radio silence that had been initiated by Bowe’s incident. Since we hadn’t heard from him in a week, when we heard the report of Bowe’s “capture” (then unidentified) we feared that it might have been Aaron who was captured. When Aaron called, it put our hearts at rest. Also, when he called, he was instructed not to talk about the Bowe incident. In fact, when I asked him about it, he said that he didn’t know anything about it and that it must have happened elsewhere.

I do not know, but Bowe’s incident did put COP Zerok at risk, and possibly did lead to the July 4th attack… But, I have learned that so much happens in the military that we are not privy to. The soldiers are sworn to secrecy and directed to adopt “official versions” of what actually transpires. We have all heard very strange stories that do not make sense to us, here safe at home. This war has taken a horrific toll on our children, family, friends and nation. I cannot even begin to imagine what is happening in the minds of those in service overseas.

I mean no disrespect to the military, how they operate, nor do I wish to dishonor Aaron’s sacrifice in any way. As far as I am concerned, Aaron proudly took this risk in the most honorable way. He will always be regarded as a hero.

Bowe’s matter is between the Army (because he was under contract with them) and his maker.

Sadly, people who serve in battle sometimes are not able to return to their families. Other times, when they do come back, they bring trauma that is buried deep inside; they man-up the best they can. Some are more capable to handle the trauma than others are.

Aren’t we all just trying to make our own way?

Finally, speaking as an American, I am trying to understand what is now occurring, to wade through the red tape, lies and deception from wherever it emanates, in order to understand what we are truly facing, abroad and here at home.