They will never be forgotten

The documentary features video taken that day by soldiers, as well as propaganda video found on insurgents weeks after the battle.

“Those who expect to reap the blessings of freedom, must, like men, undergo the fatigue of supporting it.” – Thomas Paine 1776

July 4th, 2009 at 0535 the first round impacted Combat Out Post Zerok, E. Paktika, Afghanistan as Able Company 3-509 jumped into action to respond in kind. 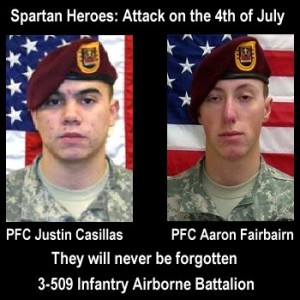 “The attack on Cop Zerok was an assault on the men who fought bravely that day. But it was also an affront on the values that make America great. It was no coincidence the insurgence attacked on Independence Day. These terrorists stand against everything the United States fights for. The 4th of July is a day to celebrate our freedom and during all the wonderful festivities take a moment to remember the sacrifice of men like Casillas and Fairbairn along with the millions before them that have paid the ultimate sacrifice for our liberty.”

Awards from the July 4th Attack

Our deepest gratitude for all the men who fought bravely with PFC Aaron Fairbain, and to all the men and women continue to serve for the greater good. God bless you.